Ask for an original and numbered manuscript in black ink on parchment:

Yuste is an indeterminate composition. On it, the composer invites the performer to be creative and to play its own version of the work. This is something really good for musicians because they sometimes ask: Why I have to play this composition as the composer has written it? Couldn't I decide how to play it? Therefore this composition is specially done for active performers, unique musicians who decide to play their music as they like. As a result, for instance and among many other things, there are some indeterminate patterns that allow musicians to play them in a freely way.

The composition was commissioned by Pedro Javier Yuste as a present for his father on January, 2013. The title -father's surname- appears on the score since the staves caricature Yuste. Speaking about its style, the work is based on some rhytmic and joyful melodic elements influenced by jazz.

Yuste is not only a musical but also a visual artwork.

« Ro Snail lullaby »
back to top 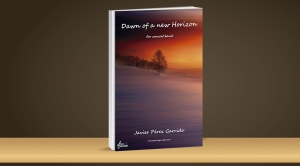