Last Day of the Dinosaurs

I. A Journey of 66 Million Years
II. The Birth of a Triceratops
III. The Flight of the Pterosaurs
IV. Walking with Alamosaurus
V. Velociraptors go on Hunting!
VI. T-Rex appears on Scene
VII. Scape from T-Rex!
VIII. Dawn of the Final Day
IX. The Impact of the Asteroid

Last Day of the Dinosaurs is a descriptive sinfonietta that evokes various scenes happened during the hours before the impact of the asteroid that caused the Cretaceous-Tertiary extinction.

A Journey of 66 Million Years represents an exicing travelling through this lost world. During this movement, spectators can imagine amazing landscapes surrounded by wild nature.

The Birth of a Triceratops is an intimate moment full of tenderness where we can have a look to the birth of one of the most recognized dinosaurs as well as its first little steps.

The Flight of the Pterosaurs stages the flight of a group of pterosaurs, the flying dinosaurs that reigned over the Cretaceous skies.

Walking with Alamosaurus is an intrepid journey alongside the largest dinosaurs that have ever existed, huge herbivorous creatures that reached more than 30 meters in length and 70 tons in weight.

Velociraptors go on Hunting! recreates a fast and organized hunt in which the velociraptors show their intellectual and physical supremacy over various groups of herbivores fleeing in terror from their predators.

When the hunt develops its entire splendor, a dreaded and hungry tyrannosaur appears attracted by noise and smell of fresh blood. It is the sixth part: T-Rex appears on Scene.

During Scape from T-Rex! the herbivores as well as the velociraptors run away as fast as possible for preserving their lives. All of them know they have nothing to do if they face the tyrant king of the Cretaceous.

Dawn of the Final Day puts an end to this violent night of hunting showing the first rays of the last rising sun. The mystery of dawn gives us a sinister sensation; something terrible is going to happen.

At the end of the composition the music becomes more violent and aggresive to represent The Impact of the Asteroid that turned the earth into hell. This impact released as much energy as a hundred terratons of TNT, beyond a billion times the power of the atomic bomb dropped on Hiroshima.

Last Day of the Dinosaurs 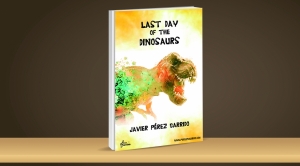